Looking For Love, In All The Wrong Places (Part One in a Series of Spiritual Misadventures).

This is Part One in a series of pieces about how your humble narrator found himself. 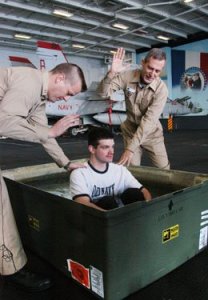 I think it was around Thanksgiving of 1998 when my search for answers led me to get involved in what can only be described as a “cult” – for a lack of a better term. Of course, using a word with such strong implications automatically makes me a kook, right? Wrong.

This wasn’t some Death Cult led by an enigmatic frontman who wanted us all to wander the streets begging for donations, so that we could all depart the planet via a spaceship hidden in the tail of a comet or some shit like that. It certainly wasn’t a group that was stockpiling weapons and Sarin nerve gas. And I promise you – out of the entire group of people involved in the whole thing, I was probably the only one who was/is capable of taking sentient life.

These were some terribly fucking broken people, man. People who felt like the world had forgotten them. People who were really just looking for something, anything resembling some hidden wisdom that could give them a little bit of hope, you know? I know I was certainly broken at this point – six months removed from a nasty addiction that almost killed my ass dead, working a shitty job, and fresh out of a relationship that was never going to work out for either party involved. Not to mention that the loss of my mother was still fresh and the wound was wide open and infected.

Basically – I was ripe for the spiritual picking*.

*Kind of like how ripe I was after this bartendress that used to work for me gave me this photo as a token of our torrid affair back in 1999. This kind of shit would go on all night long…

I was already spending a fair amount of my own time studying different religious ideas and schools of thought. Ever since I was little, I found the idea of faith to be exciting and something that made me even more curious. And after dealing with extremely religious members of my own family treating me shittily during the death of my mother, I wanted to be able to know as much as I could about that side of things – kind of in a “know thy enemy” type of way.

I still have a hard time remembering exactly how it came to pass, but one of my employees must have noticed some of my reading material on my desk. Every now and then, she would ask me questions about my feelings on certain things, like how I felt about The Vatican blaming Satan for most of the wrongs in the world, and advocating exorcisms. Or asking me all kinds of questions about my feelings on astrology and whatnot. Normally I would have found someone asking me shit like this to be intrusive or rude, but Cindy never came off as such. It always felt like an older sister or an Aunt was just trying to get to know a distant relative.

Cindy was an older woman, and she was waiting tables for me as her second job. In all my time running restaurants, I don’t think I’ve ever had an employee that busted their ass more than she did, which led me to respect her a great deal. No matter how tired she was from her day job, she was always smiling, gracious, and kind to everyone – even the fuck-up kids I had working in the joint at night.

I didn’t really blink twice when she asked me if I would come to church with her. I actually found it to be a very genuine and kindhearted gesture coming from someone who could clearly see my inner turmoil in regard to the ideas of any form of organized religion. Cindy, being the sounding board she was apt to be, had already been informed of the circumstances surrounding the death of my mother, and was well aware of my need for some kind of answers. Of course, I accepted.

Oddly, when I asked her where the church was, she told me it was at a friend’s home, and that the group of people meeting there would be quite small. I asked her what kind of service it would be, and she told me it would be a Catholic Mass, followed by a meal and a movie, with some teaching thrown in for good measure. She could tell I was a little baffled, and explained to me that I would be fine, and that I would have a good time and that my spirits would be lifted.

Whatever – I was game, you know? Anything was better than the fucking angry and empty feeling I had inside at that point.

Filed under i used to be stupid, nuggets of infinite wisdom, the spiritual misadventures of sean, who is sean?